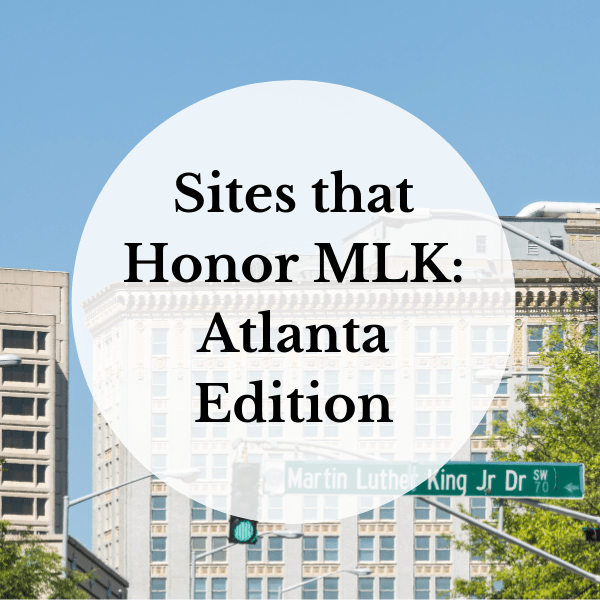 Atlanta is a city rich with history. In this post, you’ll learn about more than 17 Sites that Honor MLK: Atlanta Edition. No visit to Atlanta is complete without checking off a few stops on this list! These are also must-see spots for Atlanta residents who wish to more fully understand their city’s history and MLK’s legacy.

Be sure to check each venue’s webpage for the most up-to-date visitor information and safety protocols!

In this guide, you’ll find: 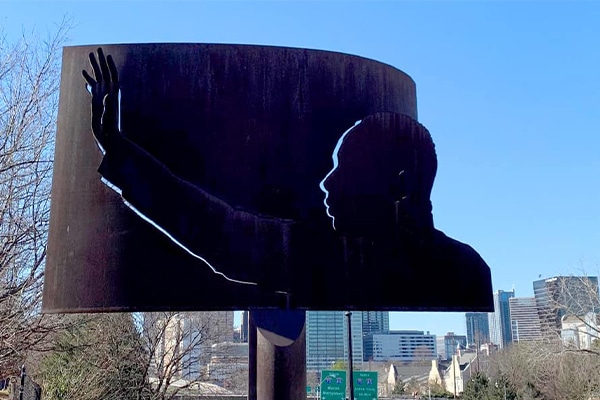 1. Take a Walking Tour of MLK Atlanta Sites – One of Our Favorite MLK Atlanta Experiences

See a little bit of everything with Unexpected Atlanta’s Martin Luther King, Jr. Tour. During this tour, you’ll learn about MLK’s Atlanta legacy. Get an in-depth look at the people and locations that inspired this leader. Plus, this tour has been named by Conde Nast as one of the 16 best things to do in Atlanta.

Highlights of the tour include seeing many of the sites included in this list. For example, you’ll visit the historic Ebenezer Baptist Church and see Freedom Hall at The King Center. You’ll also take in amazing views of the city on Jackson Street Bridge. The tour ends at the reflecting pool and memorial where Dr. and Mrs. King are entombed.

Did you know that MLK’s grandfather, father, and Dr. King himself we were all alumni of Morehouse College in Atlanta? MLK’s brother and two sons also attended the college, which is known for producing high-achieving alums.

3. Learn More About The King Center

The Martin Luther King, Jr. Center for Nonviolent Social Change was established in 1968 by Coretta Scott King. Since then, the organization has emerged as a significant destination and resource center for hundreds of thousands of people each year.

The King Center operates as both a memorial site as well as a nonprofit organization. Its services include educational and community programs. For example, The King Center offers nonviolence education, community talks, a resource library, and a youth leadership academy. 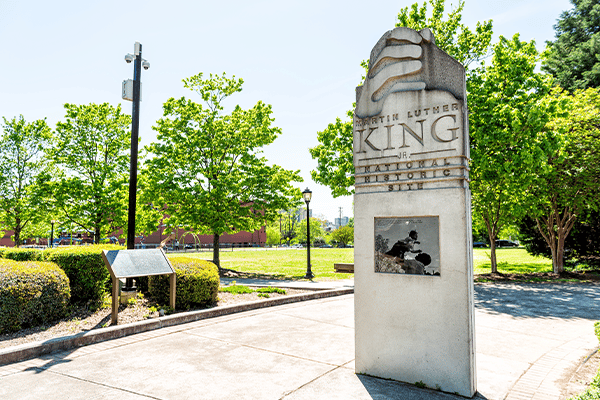 While you’re there, stroll through the “I Have a Dream” World Peace Rose Garden, which was planted in 1992. The site is an artistic interpretation of Dr. King’s life and ideals. Well-behaved, leashed pets are welcome on the outdoor grounds. As a result, this is a great activity to pair with a visit to Oakland Cemetery. Read more about Oakland Cemetery below; this site also welcomes 4-legged visitors.

The park’s Visitor Center is currently closed. However, during ordinary times, this is a great spot to begin your visit. Here, you can get a brief orientation of the historic site and learn how to engage respectfully with the site’s history. You can also view the “Children of Courage” exhibit, geared toward teaching children about the Civil Rights movement.

5. See Where it All Began at Dr. King’s Birth Home

Dr. King’s birth home is part of the Dr. Martin Luther King Jr. national historical site mentioned above. The building is currently closed as a safety precaution. However, normally, you can take a free, half-hour, ranger-led tour of this significant downtown Atlanta site.  Tours are offered first-come, first-served and tend to get fully booked up when available!

This historic spot is where Dr. King was born on January 15, 1929. He also spent the first twelve years of his life here. The building is a two-story, Queen Anne style house. It had been purchased by King’s grandparents in the early 1900s. After King was assassinated, plans were set in motion to restore the house as a historic museum. 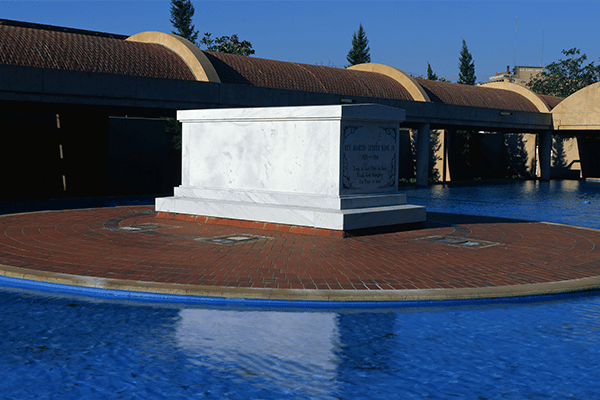 On the grounds of the MLK, Jr. National Historical Park, you can view the tombs of Dr. and Mrs. King.  This significant site is a peaceful and contemplative place to honor their legacy.

MLK, Jr. was first laid to rest at the Southview Cemetery, but was relocated to this site in 1982. An eternal flame in front of the tomb represents the ongoing work to fulfill Dr. King’s dreams of justice, peace and equality.

Get more information on visiting Dr. and Mrs. King’s gravesites.

Visit Atlanta’s historic Ebenezer Baptist Church in the Sweet Auburn neighborhood. This church is where Dr. Martin Luther King, Jr.’s father and grandfather pastored. It was also where the Civil Rights leader was baptized, ordained and served as co-pastor with his father until 1968.

Read more about Ebenezer Baptist Church and plan your visit.

Built in 1892, Fire Station No. 6 is just down the street from MLK, Jr.’s birth home. Located in the historic district of Auburn Ave, this fire station served the area in which the King family lived.

Fire Station No. 6 was built in 1894 and served the “Sweet Auburn” community through 1991. At that time, it was the oldest operating fire station in Atlanta. Now, it operates through the National Park Service as a part of the MLK, Jr. National Historic Park.

This fire station was one of the first in Atlanta to hire Black firefighters. When you visit, you can learn more about how the Atlanta Fire Department was desegregated. Plus, get an up-close look at a 1927 American LaFrance fire engine. 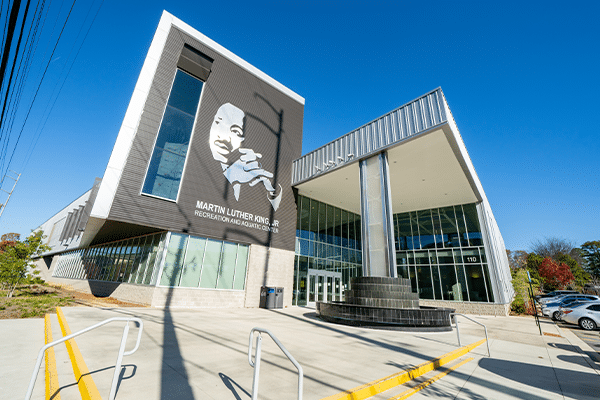 A grand mural of MLK welcomes you to the MLK, Jr. Recreation and Aquatic Center. With the Civil Rights leader’s words decorating the building, MLK’s legacy is honored throughout this downtown space.

The Center is operated by Atlanta’s Parks Department and features a 25-yard lap pool with the city’s first zero-entry indoor pool. The facilities also include a fitness area and weight room, a climbing wall, and a walking and jogging track. Plus, you’ll find indoor and rooftop event spaces, classrooms, a senior center, lounge, computer lab, and more.

Learn more and plan your visit to the MLK, Jr. Recreation and Aquatic Center.

Atlanta has plenty of places where you can explore the Civil Rights movement. Here are a few others:

You’ve probably seen this mural on social media. It’s a painted image of Civil Rights icon John Lewis, with the word “HERO” painted above. The mural features a snippet of John Lewis’s speech from The March on Washington.

This downtown Atlanta museum is a destination for tourists from around the world. Explore issues of race, social justice, and human rights through the museum’s on-site exhibits and programs. You can even take a virtual tour.

This special library is part of the Fulton County Library System. It’s the first public library in the Southeast to offer specialized collections on of African American culture and history.

Many noteworthy Atlanta rest in Oakland Cemetery. Its grounds include the graves of Maynard Jackson, Bishop Wesley John Gaines, Carrie Steele Logan, and others. Oakland’s African American Grounds project surveys and restores unmarked burial sites. This work aims to restore a sense of dignity and identity to the people buried here.

Note: you can stroll through Oakland Cemetery and learn about its history on our Grant Part Past & Future Food Walk.

This museum interprets and presents history from an African American perspective. Further, their goal is to help people from all walks of life appreciate the many contributions of African Americans on our society.

Paschal’s history dates back to 1947, when the Paschal brothers, James and Robert, opened their first fried chicken spot. Over the years, Paschal’s became a meeting spot for the likes of Aretha Franklin, Maynard Jackson, and Dr. Martin Luther King, Jr. Later, the restaurant moved to the Castleberry Hill area.

The judges of the Fifth Circuit Court of Appeals enforced Brown v. Board of Education in the South here. In addition, the courthouse implemented significant Civil Rights legislation here.

Visiting these MLK sites from out of town? Check out our guide Visiting Atlanta: Top FAQs for Tourists.